Intelligence tests were all the rage in 1918. Without them, how could you determine whether someone was a dullard, a laggard, an imbecile, feeble-minded, retarded, or deficient (all terms I found in a single article in Century magazine)? How could you implement your eugenics program?

There were lots of articles about intelligence tests, but I was having trouble finding the tests themselves, so I had no idea where I fit in, 1918-intelligence-wise. Luckily, Literary Digest stepped in. Its February 16, 1918 issue included a test that, it promised, “is so easily used that within a brief period readers of The Digest will doubtless be applying it to their family and friends.” Okay, a hundred years isn’t all that brief, but here we go.

The test goes like this: you go through a list of 100 words, which have been selected randomly from the dictionary and placed in order of difficulty, and see how many you can define. 75 and above makes you a “superior adult”—top third of the population. 65 makes you an average adult. There are different scales for kids, but, trust me, if you’re a kid and you’re reading this blog, you’re superior.

The test designers are pretty flexible about scoring. Like, if a child defines “orange” as “an orange is to eat,” or “gown” as “it’s a nice gown that ladies wear,” then that’s okay. The key is to establish that you have a clear understanding of what the word means.

The easiest words are at the beginning, so you get a free pass on some of them depending on your age. A fifteen-year-old starts with #21. I’d suggest starting at #51.

Here’s the test. If you’re going to take it, don’t read any further until you’re finished—spoilers lie ahead. The Google dictionary is an easy way to check your answers. 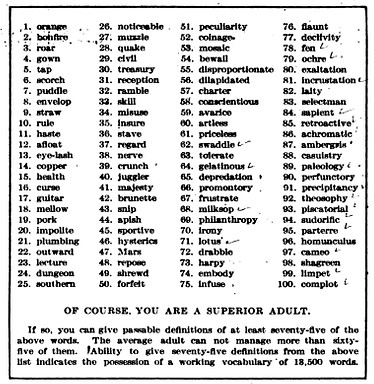 Whew! That was exhausting, wasn’t it? And surprisingly hard. Or maybe that’s just me.

I was pretty cocky going in. Not to get all braggy on you, but vocabulary is my thing. Whenever there was a vocabulary test—which, luckily for me, there is at several key junctures in the American educational process—I would ace it. Random dictionary words, how hard can they be? I figured I might miss a couple of 1918-specific words, about wireless telegraphy or animal husbandry or whatever, but I was counting on upper nineties.

I got a 92. Safely in the superior adult range, but not spectacular. If there had been a competition, with a prize like, say, a date with Ezra Pound, I definitely wouldn’t have won.

In some cases I was close. I knew that theosophy was a philosophy related to theology, and that there were societies about it, but I didn’t know exactly what they believed. I knew a limpet was a sea creature, but I thought it was a wiggly fish. (Which doesn’t make sense in retrospect, given the phrase “stuck to me like a limpet.”) Other words, like drabble*, sounded like I should know them, but when I thought about the meaning I drew a blank. The only one that didn’t even sound familiar was shagreen. So. 92.

At this point, you may be thinking, false advertising—the blog title is about an intelligence test, not a vocabulary test. But the amazing thing is, it IS an intelligence test! The result, Literary Digest says, is reliably within ten percent of your score on the Binet-Simon (IQ) scale. And it doesn’t depend much on your level of schooling.

That’s right, this is a reliable, objective test of intelligence! There’s no earthly reason why, say, a sharecropper’s child should have more trouble identifying a cameo 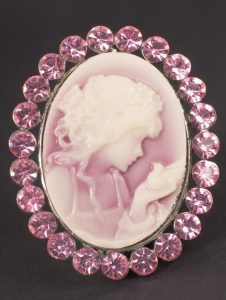 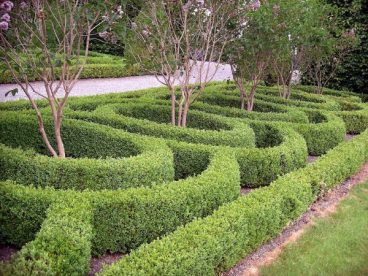 or the other kind of parterre 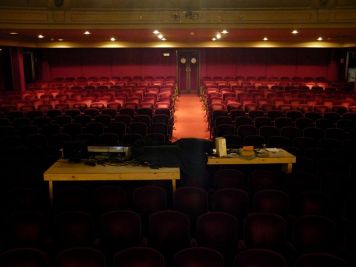 than the child of a Rockefeller or a Carnegie.

It makes you think, doesn’t it? If a vocabulary test that’s so clearly reliant on cultural background is such an accurate predictor of your score on an IQ test, then maybe that should raise questions about the IQ test?

But that’s just me, with my 21st-century nitpicking.

I hope you had fun. If anyone got 100, please be in touch—and let me know where the hell you ever heard of shagreen!

A box covered with shagreen

*A cool feature of the Google dictionary is that it has a little graph showing how the word’s popularity has changed over time. Generally, these are fairly predictable, but “drabble” takes off like crazy in the 1960s and peaks in about 1975. I was puzzled, since I didn’t recall everyone suddenly talking about things becoming wet and dirty by movement into or through muddy water. Then it dawned on me: the graph traces the career path of Margaret Drabble, the British novelist. Who’s great! If, unlike me, you’re allowed to read books written in the last hundred years, I recommend The Millstone.

16 thoughts on “Are you a superior adult? Take this 1918 intelligence test and find out!”