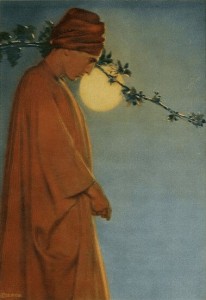 Illustration by Adelaide Hanscom Leeson, “The Rubaiyat of Omar Khayyam,” 1905, with George Sterling as model

There I was, thinking I was all done with bad mother poems, when I discovered the worst one of all, by George Sterling–in the same issue of The Bookman, as it happens, as I found hitherto bad-mother-poem champion Anna Hempstead Branch.

Until a few months before, The Bookman had been running a series called “The Masque of Poets.” I came in in the middle, couldn’t make much sense of it, and filed it away under Incomprehensible 1918 Things. But the “Masque’s” editor, Best American Short Stories founder Edward O’Brien*, had published a book based on it, and there was a review by Bookman poetry critic Jessie Rittenhouse.**

The gimmick in “The Masque of the Poets”: each month, The Bookman ran a few poems by famous writers, published anonymously. This wasn’t much of a gimmick, as Rittenhouse pointed out—it would have been more fun, she said, to have a contest where people guessed the poets’ identities. On the whole, she was lukewarm about “The Masque,” reckoning that the poets hadn’t submitted their best work. There were some pleasant surprises, though. Like George Sterling’s poem “The First Food,” which she called “poignant and intimate.”

I was skeptical. The 49-year-old Miss Rittenhouse was a big deal on the poetry scene—secretary of the Poetry Society of America and former poetry editor of the New York Times Book Review—but, poetry-wise, she was stuck in 1865.

Here’s “The First Food.” Judge for yourself.

Mother, in some sad evening long ago,
From thy young breast my groping lips were taken,
Their hunger stilled, so soon again to waken,
But nevermore that holy food to know.

Ah! nevermore! for all the child might crave!
Ah! nevermore! through years unkind and dreary!
Often of other fare my lips are weary,
Unwearied once of what thy bosom gave.

(Poor wordless mouth that could not speak thy name!
At what unhappy revels has it eaten
The viands that no memory can sweeten, —
The banquet found eternally the same!)

Then fell a shadow first on thee and me,
And tendrils broke that held us two how dearly!
Once infinitely thine, then hourly, yearly,
Less thine, as less the worthy thine to be.

(O mouth that yet should kiss the mouth of Sin!
Were lies so sweet, now bitter to remember?
Slow sinks the flame unfaithful to an ember;
New beauty fades and passion’s wine is thin.)

How poor an end of that solicitude
And all the love I had not from another!
Peace to thine unforgetting heart, O Mother,
Who gavest the dear and unremembered food!

I was all set to file this away for use as Worst Poem of the Month when I decided to look into Sterling’s life to see whether by any chance he killed his father and married his mother. He didn’t, but his actual story is almost as weird.

Sterling was born in 1869 in Sag Harbor, Long Island, the first of nine children of a doctor who tried to get him to become a priest—which, as we will see, would have been a very bad fit. He followed his uncle to California, worked in real estate for a while, made a name for himself locally with a book of poetry published in 1903, and moved to the sleepy town of Carmel-by-the-Sea in 1905. Sterling quickly put Carmel on the map as a center of literary, artistic, and Bohemian life, earning himself the sobriquet “The Uncrowned King of Bohemia.” An exodus from San Francisco following the 1906 earthquake increased the town’s popularity.

Sterling was no exception to the rule that all the people we’ve ever heard of from back then were friends with each other. He was the protégé of The Devil’s Dictionary author Ambrose Bierce, who followed him to Carmel, and his best friend was Jack London***. Writers Upton Sinclair, Gelett Burgess, Sinclair Lewis, Robinson Jeffers, and Mary Austin and photographer Arnold Genthe were among those who came to Carmel for temporary or permanent stays. (Okay, I’d never heard of the last two.)

Cosmopolitan published Sterling’s poem “A Wine of Wizardry” in 1907, and Bierce proclaimed him the heir to Keats, Coleridge, and Rossetti. Many others begged to differ. There was apparently a low bar for controversy in 1907, because this one was huge. Meanwhile, things were getting pretty wild in Carmel. There were, or so rumor had it, nude beach parties, free love (gay and straight), wife-swapping, and opium dens.

Then the tragedies began. In November 1907, Nora May French, a glamorous young poet who was staying with Sterling and his wife, committed suicide by drinking cyanide that she had obtained on the pretext that she needed to polish some silver. News accounts varied as to whether French had been sleeping in the same room as Sterling’s wife. (Sterling was away.) This, and tales of French’s nymphomaniac ways, increased Sterling‘s notoriety. Others in the circle also met sad ends. London died following a morphine overdose in 1906 (accidental, apparently, but there were rumors of suicide), and Bierce disappeared in Mexico in 1914. 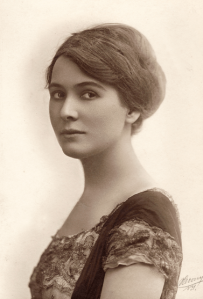 Sterling began drinking heavily. His wife filed for divorce in 1913, citing non-support, idleness, and dissipation. In August 1918, she too committed suicide by taking cyanide. Sterling began carrying around a vial of cyanide himself, saying, “A prison becomes a home if you have the key.” He finally took a lethal dose in November 1926, while H.L. Mencken was visiting him in San Francisco. (Yes, the Uncrowned King of Bohemia was friends with the Sage of Baltimore too. A volume of their correspondence was published in 2001.)

But let’s not leave Sterling on this sad note. He and his crowd had a lot of good times. Like when they were pounding abalone to tenderize it. This was the only time that it was permissible to sing the Abalone Song, which was composed mostly by Sterling, with contributions by London, Lewis, Bierce, Burgess, and others. There were many versions. This one is from Carl Sandburg’s 1927 folk song anthology The American Songbag:

From “The American Songbag” by Carl Sandburg, 1927

*Edward O’Brien had recently started a new feature in The Bookman called “War Echoes.” It generated a lot of mail, and the nearest post office in South Yarmouth, Massachusetts, was two miles away, so he asked the postal service to open a new post office closer to his house. And they did!

**The Bookman was incestuous like that. Rittenhouse’s first book of poetry had been reviewed in the previous issue—lukewarmly, which must have stung.

***Sterling was portrayed in two London novels that I never heard of, Martin Eden and Valley of the Moon.

3 thoughts on “The Uncrowned King of Bohemia: The fascinating story of a not-so-great poet”