Remember Rita Senger, who illustrated the winning cover in the 1915/1920 Magazine Cover Smackdown? “Next time I write about illustrators I love, I’m going to write about Senger,” I promised.

And I tried! As I prepared for my Thanksgiving post on 1920 women illustrators I’m thankful for, I scoured the internet for illustrations by, and information about, Senger.

And came up with…almost nothing. Just a handful of magazine covers, most of which I’d already seen, the last one this August 1919 Vanity Fair cover.

Armed with the last name Stein, I found a listing for a Mrs. Rita Senger Stein of Highland Park, Illinois, among the life members of the Art Institute of Chicago in its 1925 annual report. That was it.

If I wanted to find out more about Rita Senger, I realized, I was going to have to do something almost without precedent for this blog: contact an actual living person.*

So, one evening back in November,** I sent a message to Lori Kennedy asking if she could put me in touch with Patty Stein. By the time I woke up the next morning, there was an e-mail from Patty.

Patty turned out to be a delightful person, and we talked on the phone for almost an hour. She was making a cake as we talked, which I found extremely impressive, since I consider myself a decent baker but I can’t even focus if there’s music on in the background.

Rita Senger was born in New York City in 1893, the daughter of Adolph and Barbara (Ehrlich) Senger. (The name was sometimes spelled “Sanger.”) She was an art prodigy as a child, and she went to art school at the age of sixteen or seventeen.

Senger illustrated one cover for each magazine in 1916, 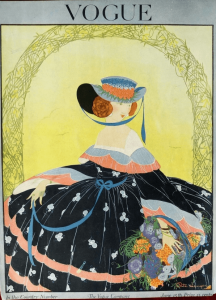 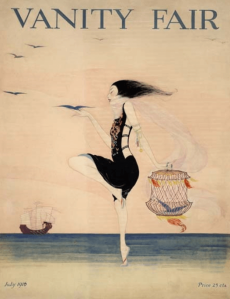 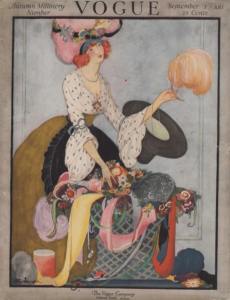 Patty is not sure how Rita met her husband, Joseph Stein. It was an unusual match for the time; he was Jewish and Rita, who came from a non-religious family, was not. Stein’s grandfather was one of the first Reform rabbis in Chicago, but he himself was not a practicing Jew. He was a wealthy businessman, the owner of Lucien Lelong, Inc., the U.S. affiliate of the Paris-based Société des Parfums Lucien Lelong. (The two companies were sold to Coty in 1953.)

These drawings of Lucien Lelong’s Paris office appear on a blog about the company’s history. The magazine and date are unidentified, but they look like ca. 1920s Vanity Fair to me.****

Joseph had a keen artistic sense himself, and he paid a great deal of attention to the appearance of his products. Here is his patent for a Lucien Lelong perfume bottle:

When I saw a picture of Rita with her extended family on Lori Kennedy’s website, I hoped that, having given up her career, she had gained a fulfilling life of a different sort. Life is rarely so simple, unfortunately. Like many parents of their time and class, she and her husband sent Tom to boarding school from an early age. Living outside of the hustle and bustle of the city, she felt isolated. “I believe she was a very frustrated artist and wife,” Patty said.

Rita did appreciate the benefits of wealth, though. In addition to their home in Highland Park, she and her husband owned, over the course of their marriage, an apartment on the Champs-Élysées and houses in Maine and in the Long Island town of Oyster Bay.

When their son Tom grew up, he wanted his own family to be very different from the one he was raised in. He married Pauline Blume, the daughter of Ernest Blume, a Marshall Field’s home goods buyer. Ernest and Joseph had had a nodding acquaintance before the couple met. The two men, who shared an appreciation for aesthetics, saw each other occasionally at lunch at Marshall Field’s.

Art was an important part of the family’s daily life. “I did not grow up with a mom who had crocheted doilies on the sofa,” Patty said. When the family went to an exhibition of Bertoia’s work, Patty’s sister was told to stop touching the tree sculptures. “My grandmother lets me,” she said.

Rita died on December 30, 1990, at the age of 97. For her descendants, her art collection, her furniture, and her own art work serve as tangible reminders of her artistic sensibility and her talent. For the rest of us, her art lives on online. The Library of Congress, which has the original of the July 1916 Vanity Fair cover in its collection, featured it in a 2002 exhibition titled “American Beauties: Drawings from the Golden Age of Illustration.”

If Rita had enjoyed that same freedom in her own life, the world would be the richer for it. Still, I feel lucky to have discovered the work she did leave us, and, through Patty, to have learned this remarkable woman’s story. I can think of no better way to celebrate Women’s History Month than telling it here.

*The “almost” being because in 2018 I called the Huntington Museum of Art in West Virginia and talked to a very nice woman who confirmed that the museum still owned the painting “Lead Kindly, Light,” by William Edouard Scott, which was featured on the cover of the April 1918 issue of The Crisis. Also, I e-mailed the Library of Congress in 2019 for a post that’s still on my to-do list. But contacting people whose job it is to answer your questions is very different from reaching out to a stranger and saying, “Tell me all about your grandma!”

**I know, not exactly lightning speed. In my (feeble) defense, I left Washington, D.C., where I’d unexpectedly spent almost a year, for Cape Town shortly after my conversation with Patty, and after that I had some time-specific posts to do for the holidays, Black History Month, etc. Still!

***Or possibly three. Vogue’s website identifies this September 15, 1917, cover as being Senger’s,

but credits the September 1 cover, which is definitely hers, to Alice De Warenn Little, so it’s possibly that they flipped the attributions. Vogue published two issues a month at that point, and I’ve never come across two covers by the same artist during the same month.

****The life of Lelong, who was also a prominent couturier, makes for fascinating reading. During his marriage (possibly of convenience) to Princess Natalia Pavlovna Paley, she had a messy entanglement with the writer Jean Cocteau, who was gay. Another one of Lelong’s wives later married Collette’s widower.

4 thoughts on “The Brief, Brilliant Career of Rita Senger”