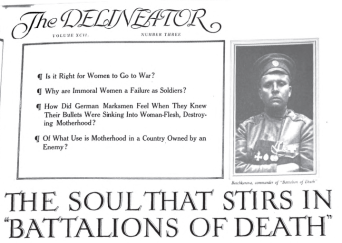 Reporting about Russia’s battalions of women soldiers in the March 1918 issue of The Delineator, war correspondent William G. Shepherd asks everyone the same question.

I thought of how it must feel to be a soldier and know that your bullets were sinking into woman-flesh, destroying motherhood; and of how, in spite of all this, you must shoot to kill these women soldiers lest they kill you.

He gets an interview with Maria Bochkareva, the commander of the First Women’s Battalion. Amid the chaos of the Russian Revolution, her soldiers have deserted her, and she’s hospitalized in Petrograd (now St. Petersburg). He asks her why she went into the war. Weren’t the men fighting well enough to suit her?

“Yes, indeed,” she exclaimed…“But I can’t see why there should be any difference between men and women in this war and so I enlisted and went to the front.”

“But women have got something that men haven’t,” Shepherd mansplains. “They have potential motherhood, and if you kill that, you kill the whole race.” 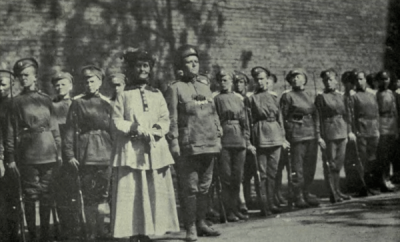 Bochkareva, who at age twenty-eight has left two abusive husbands and fought in two wars, has a less sentimental take on the matter. “What is the use of motherhood in a country which is owned by an enemy?”

are mere sets of brains that go to war. They are mere pairs of legs that can march, pairs of arms that can carry rifles, and most of all they include index fingers that can pull triggers, and good right eyes that can see marks.

Another issue weighing almost as heavily on Shepherd’s mind is the girl soldiers’ sex lives. He meets a deserter from Bochkareva’s battalion and asks her why she left.

“I left because there were too many bad girls in our company,” explained this seventeen-year-old miss in riding breeches who sat in a chair on the sidewalk before my hotel with her knees crossed.

“But I didn’t think morals had anything to do with fighting,” said my interpreter, who happened to be a celebrated Russian writer.

“Nothing to do with fighting!” exclaimed the girl. “Why, do you know you can never trust a bad girl in the firing-line?…I’ll fight for Russia, but not for that crowd.”

A light goes on in Shepherd’s head.

This was the first idea we got of the fact that in the girl legions of Russia, good girls make good soldiers and bad girls make poor ones.

The seventeen-year-old soldier goes on,

“Love hasn’t got any place in war, and when it comes to the other thing, it not only ruins girl soldiers, but the men soldiers, too.”

“But don’t the girls ever talk of their sweethearts at the front?” asked my interpreter.

“The girls who are in earnest don’t,” she said. “As soon as a girl begins to get sentimental or to talk about some man she likes, we just remind her that within a few days, if she is a good soldier of Russia, she may be dead.” 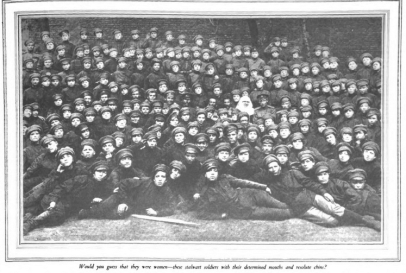 Another thing about the girl soldiers: they’re so girly! In the barracks of another newly formed women’s battalion (made up, its leaders assure Shepherd, entirely of good girls),

Some of them were reading, some were knitting, and several of them were romping girlishly. One was trying to stick another with a hatpin and another was chasing a girl with a glass of water with which she threatened to deluge the fugitive. It was just such a romp as one might have expected in the hallways of an exclusive girls’ boarding school. Only the clipped heads and the trousers seemed out of place.

Men soldiers do not giggle when they climb into cars, but I must admit that these girl soldiers did. They helped each other remove their packs from their backs; they threw their short, stubby rifles into the cars and then boosted each other in as best they could. There was giggling a-plenty and even little shrieks of mirth; when a girl fell, there was a shout of laughter.

For all his condescension, Shepherd ends up respecting the soldiers of the “Battalion of Death,” as Bochkareva’s soldiers were known. They fought courageously against the Germans, dodging bullets as they took ammunition to the front lines. For military security reasons, he can’t provide the names of the heroes, but

I can say that it was Bochkareva’s band that captured a hundred Germans and forced them to throw down their rifles and throw up their hands and exclaim, “Ach Gott! The Russian women!”

Shepherd visits some wounded veterans of the battle in the hospital and spots a German helmet. His interpreter asks the owner where she got it.

“I took it from a German soldier who tried to shoot me after he was wounded,” she said. “I was trying to help him, when suddenly he raised himself to his elbow and fired at me with his revolver.”

The Czar’s government, Shepherd tells us, authorized the women’s battalions in order to shame war-weary men into joining the army. But the situation was changing fast. On March 3, 1918, just as Shepherd’s story was hitting the newsstands, Russia made peace with Germany. 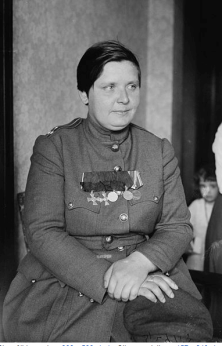 Bochkareva ended up on the wrong side of history. Branded an “enemy of the working class,” she was executed by the Soviet secret police in May 1920, at the age of thirty. The execution was against Lenin’s orders, and her killers were later put to death themselves.

As Bochkareva’s troops headed to the front, a Jewish seamstress stood sentinel on the train. At each stop, the soldiers faced insults and leers from men on the platform. At one station, a group of male soldiers tried to peer inside, saying, “We have come to see the girls.” The sentinel

made no outcry. She simply raised her rifle toward them and said:

“There are no girls here; only soldiers of Russia.”

(UPDATE: You can see Maria Bochkareva at a July 4 ceremony in Washington, D.C. in the last few seconds of this video, which I included in my post on the July 4 loyalty parade in New York.)