The April 1918 issue of The Bookman has just the thing: a graphic about book publication in the United States and Great Britain. And a picture is worth a thousand words, which is the length that my typical post has swollen to these days. 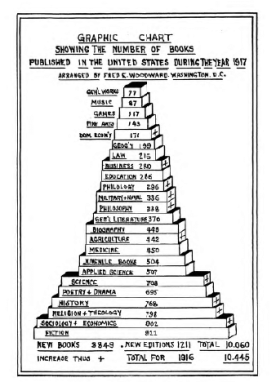 And in Great Britain: 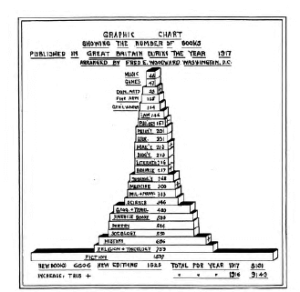 In the accompanying article, Fred E. Woodward, who drew the graphic, points out that

a single glance at the two charts reveals a notable difference between the two figures, the one representing the books of the United States being an almost symmetrical pyramid endued with the appearance of stability and a certain element of vigor and strength, while the one representing Great Britain exhibits an enormous overplus of works of fiction as compared to the remaining classes.

Interesting. Not so interestingly, Woodward goes on to explain the charts at length, which kind of defeats the purpose of a chart. But I can forgive him a lot because, as far as I can tell, he is basically inventing information graphics here. (I did some research and found some earlier examples, going back to a depiction by J.J. Sylvester of chemical bonds and their mathematic properties in Nature magazine in 1878.* So let’s just say Woodward was inventing fun infographics.**) 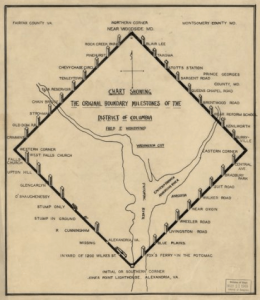 Fred Woodward really, really liked drawing infographics about books. He did a way more complicated one in the April 1917 issue of The Bookman, and, also in 1917, wrote a graphic pamphlet on book sales for the U.S. Bureau of Education. Woodward also wrote a 1907 book called A Ramble Along the Boundary Stones of the District of Columbia with a Camera. I’m going to D.C. soon and, believe me, I’m going to be rambling along those boundary stones. 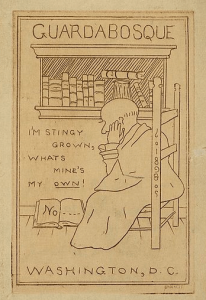 The Library of Congress has this 1898 bookplate of Woodward’s (drawn by someone else, though) in its collection.  “Guardabosque” is a play on his name—it means forest ranger in Spanish, which is apparently the original meaning of Woodward. According to the LOC, there’s an inscription on the back saying that Woodward was the head of the books department at Woodward & Lothrop in Washington. A little more sleuthing revealed that he was the younger brother of the founder of the iconic, and now sadly out of business, department store.*** He’s apparently no relation, though, to graphic artist Fred Woodward, formerly the art director of Rolling Stone and now at GQ.

I was going to hold forth about how few books were published 100 years ago compared to now, but, you know, words. So here’s an infographic: 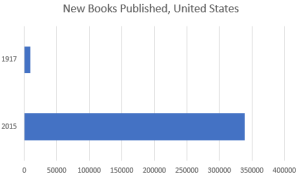 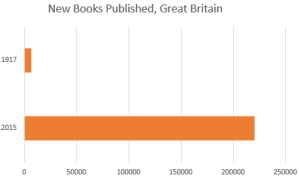 I realize that this is an apples-and-oranges situation in terms of comparisons. And that I’m no Fred Woodward (either one) infographics-wise.

Still, you get the picture.

*Sylvester, as it turns out, coined the word “graph” in another 1878 Nature article. This is even more amazing than there having been no such word as “surreal” in 1918. If you don’t believe that “graph” is so new, which I didn’t, here’s the Google N-Gram:

**I realize that Woodward probably wasn’t doing this all by himself. Please be in touch if you know of other examples!

***I have wonderful memories of going Christmas shopping in the children’s castle at Woodies (as we D.C. cognoscenti call it) in the 1970s.

2 thoughts on “A pioneering 1918 infographic, worth a thousand words”