Best short story: “The Man Who Came Back,” from Buttered Side Down: Stories, by Edna Ferber (1912)

I decided to expand this category to include any short story I read, not just magazine stories from the “current” month. Just in time, because I’m loving this Edna Ferber collection. Ferber, who is best known for later novels like Show Boat and Cimarron and Giant—or, more accurately, for the movies and shows adapted from them—was twenty-seven when Buttered Side Down was published. She writes about ambitious young people from small towns whose big dreams haven’t panned out. They’re the most real people I’ve come across in my 1918 reading.

In “The Man Who Came Back,” Ted Terrill, our handsome hero, has returned to his small town after spending three years in prison. Here’s how, trying to keep up with the smart set, he met his downfall:

In a mad moment he had attempted a little sleight-of-hand act in which certain Citizens’ National funds were to be transformed into certain glittering shares and back again so quickly that the examiners couldn’t follow it with their eyes. But Ted was unaccustomed to these now-you-see-it-and-now-you-don’t feats and his hand slipped. The trick dropped to the floor with an awful clatter.

Ted is planning to stop in town just long enough to visit his mother’s grave—she died of heartbreak while he was in prison—and make a new start in Chicago, but on the train he runs into Joe Haley, the owner of a fashionable hotel. Joe offers him a job as a bookkeeper, saying that he’d be better off facing up to his crime at home than living in fear of discovery in a new place. 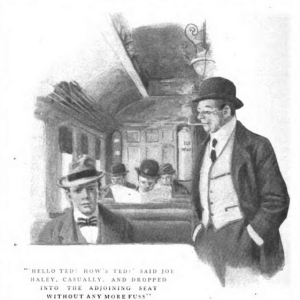 Illustration from “The Man Who Came Back,” American Magazine, April 1911

Ted is trained by his predecessor, Minnie Wenzel, who is marrying a “swell fellow.” His family’s former servant, Birdie, whose face “looked like a huge mistake,” works at the hotel as a waitress. All goes well until one day Joe tells Ted $300 is missing. “Ted, old kid,” he says sadly, “what’n’ell made you do it again?’” Birdie bursts in and unmasks the real culprit, Minnie, who has been pocketing the money for her trousseau. Ted asks Birdie if he can walk her home. But Birdie—and this is what elevates the story from good to great—turns him down. If she let him, she says,

“inside half a year, if yuh was lonesome enough, yuh’d ask me to marry yuh. And b’gorra,” she said softly, looking down at her unlovely red hands, “I’m dead scared I’d do it. Get back to work, Ted Terrill, and hold yer head up high, and when yuh say your prayers to-night, thank your lucky stars I ain’t a hussy.”

Two favorites in indigo: this one from Woman’s Home Companion, artist unknown,

…and, as always, Erté. This one’s called “Fireflies.”

Also, a paean to spring from The Liberator’s wonderful Hugo Gellert.

May wasn’t a sensational month ad-wise, but I always have a soft spot for Old Dutch Cleanser. 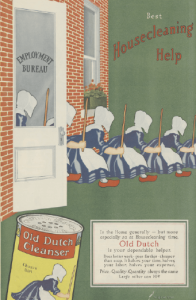 Even without the benefit of hindsight, this ad for asbestos looks ominous. 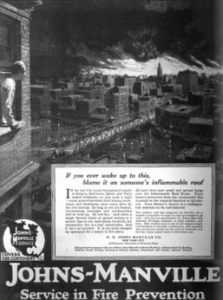 (Although not as ominous as this 1917 ad I came across in Scientific American.)

Cartooning was in its infancy in 1918, but I don’t think the artistry of that era has ever been surpassed.

Captions, though, still left a lot to be desired.

“Will you tell me what time the train that starts for Louisville reaches Glenside, and where I can change cars for Caldwell?”
“Madam, I just told you all that.”
“Yes, but I have a friend who wants to know.”

Arthur Young, The Liberator, May 1918

*UPDATE 12/7/2019: It’s Coles Phillips, most famous for his Fadeaway Girl illustrations. I wrote about him here.