Christopher Morley was one of those famous-in-their-time people no one has heard of today.* In 1918, the hardworking twenty-seven-year-old had just published Parnassus on Wheels, his first novel, and a book of light verse called Songs for a Little House,** and he had a book of essays coming out. He was also the literary editor of Ladies’ Home Journal.

In a piece in the February 1918 issue of The Bookman (originally published in the New York Sun), Morley stirred up quite a kerfuffle. The issue: what books you should choose for your guest room. “Let us assume that many of your guests are of the male sex and have the habit of reading in bed,” he writes. “You keep a reading lamp by the bed, of course, and a bookshelf. What thirty volumes would you choose to fill that shelf?”

Of course, Morley doesn’t really want to know what books YOU’D choose. He wants to tell you what books HE’D choose. As advertised, they’re pretty manly. Robert Louis Stevenson, Arthur Conan Doyle, Joseph Conrad, Rudyard Kipling. Plus some manly-sounding books I never heard of, like The Adventures of Captain Kettle and Casuals of the Sea. You can read the rest of the list here. Morley writes that

I find that for such strollers, wastrels and errant persons as frequent my house, this is a fairly well-selected guest-room library. I wonder if your readers will concur.

They didn’t. Harold Crawford Stearns sent in a list, published in March, that only had one duplicate with Morley’s, the Bible. It was equally manly, though. In April, D.M.T. Willis argued that Morley had chosen not bedtime books but “books that one wants to read when wide awake on a cold afternoon before the fire, or in a hammock under trees in warm weather.”

seems to me like the intense desire to eat candy one experiences immediately after church service, a sort of reactive indulgence, a kind of “now-I-can-do-as-I-please-for-the-rest-of-the-night” feeling.

Willis includes little blurbs with his list, like, “The Rubaiyat. Because every man and most women sometime at night want to feel as happy-go-lucky and sentimental as Omar,” and “The Bible, because some one might read it and become a poet.” His list is as lacking as Morley’s in women authors, but he’s such a charming blurber that I would totally stay at his house. 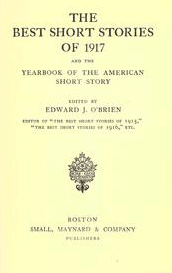 As for the contribution from Edward O’Brien, the editor of the Best American Short Stories series, all I can say is, really, Edward? The Canterbury Tales? At bedtime? I checked out another one of his choices, Religio Poetae, by Coventry Patmore. Here’s how the title essay starts:

No one, probably, has ever found his life permanently affected by any truth of which he has been unable to obtain a real apprehension, which, as I have elsewhere shown, is quite a different thing from real comprehension.

The Bookman, to its credit, is snarky about Morley’s gender policy, saying in April that

Mr. Morley’s guest-room is apparently adapted solely to the needs of his male friends—or is it that his women visitors are of the kind that do not read?***

Finally, some women, identifying themselves as “Two Old Maids,” weigh in, and at last we have a handful of women authors: Jane Addams, Edna Ferber, and Lady Montagu.

Of course, I’m just like Christopher Morley: the real reason I’m writing about this is to give you MY 1918 guest room bookshelf list.

First I need a 1918 guest bedroom, though. Luckily I found one that’s perfect:

Okay, now for my list. It includes a mix of  books I’ve read for this project, other 1918-era books I’ve been wanting to read, and a few earlier classics. In the spirit of D.M.T. Willis, I’ve included blurbs explaining why I picked each one.

Of course, what I’ve really done is put together a list of books I want YOU to have when I stay in YOUR guest room. I’ll be traveling a lot over the next few months, so get ready! 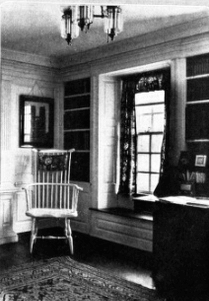 *Except for Jeff O’Neal of Book Riot, who talked about Morley’s novel Parnassus on Wheels on last year’s holiday book recommendation podcast.

**It’s just like it sounds. He writes so goopily about his wife that I assumed, based on previous 1918 experience, that she would run off with a female Imagist poet in short order. But no, they were still married when he died in 1957.

*** This can’t possibly mean what it sounds like. If it did, she wouldn’t be sleeping in the guest room, would she?