Reading the March 1918 issue of The Bookman a couple of weeks ago, I came across a brief review of The Madonna of the Future, which had recently opened on Broadway. As critic Clayton Hamilton tells us,

the heroine of this play is a very rich young woman, unencumbered with relatives, who desires to become a mother but does not desire to be saddled with a husband. In consequence of her convictions, she picks out an apparently eugenic mate and becomes, in due time, the mother of a nameless child.

My reaction: What? This is the least 1918 thing I’ve ever heard of!

The Dramatic Mirror thought so too. “The most pitiful creature of the brothel would scorn such an idea,” the magazine huffed. It was not alone, apparently—New York Chief Magistrate William McAdoo* received a number of complaints. He wrote to the theater’s lawyers telling them that, if the issue arose in court, he would have to declare the play obscene. McAdoo said that

the character of the heroine repeatedly and tiresomely states over and over again that the doctrines advanced by her are unconventional and, in the sense usually accepted by ordinary people, immoral. She says that her highest ideal of maternity is that of the cow, which might suggest that the proper place for this play would be a stable instead of the stage, committing the dialogue to learned veterinarians.

I haven’t been able to find a script of the play, but here’s what I’ve managed to piece together. Iris Fotheringham, a wealthy young woman from Tarrington, New York, hates men, but has what the Dramatic Mirror calls “one redeeming virtue—the dream of all good women—the desire of motherhood.” She decides that her secretary, Rex Letherick, would be a suitable father,** and whisks him off to Europe. After the baby is born, she blithely resumes her New York life. Rex is desperately in love with Iris, and, as the Dramatic Mirror puts it, “still willing to be her husband.” Iris gets wind that there’s another woman in the picture, gets jealous, and marries Rex. 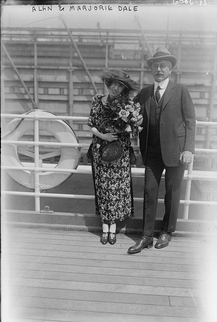 Alan Dale and his daughter Marjorie, 1900 (Library of Congress)

What makes this story even more interesting is that the play’s author, Alan Dale, was America’s most famous theater critic. The British-born Dale (real name Alfred Cohen) had been writing acerbic reviews for the Hearst newspapers since the 1880s. He had made a lot of enemies along the way. “The theatrical world is finding considerable amusement in the situation created by the police complaint,” the Dramatic Mirror gloated, speculating that the cause of the play’s troubles was a morality campaign by the city’s Tammany Hall mayor. For good measure, the magazine threw in some cracks about the play’s bad reviews.

This was unfair, as far as I can tell. The un-bylined New York Times reviewer called the play “a brilliantly written comedy of ideas,” although he complained that the ending was a copout. He noted similarities to George Bernard Shaw, but said that Shaw, “having real ideas of his own, also has the courage of them.”  Astonishingly, the reviewer got away with saying that the de-stigmatization of single motherhood was important to contemplate,

for women in these coming manless times will be much occupied with the thought that life would be less empty if only there were children. And the world will have need of new citizens.

the sort of humour…that proceeds from the comparison of something or other with a Limburger cheese or from some such observation as “‘Way Down Yeast’ ought to get a rise out of everybody.” The sort of humor, in short, whose stock company has been made up largely of bad puns, the spelling of girl as “gell,” the surrounding of every fourth word with quotation marks, such bits as “legs—er, oh I beg your pahdon—I should say ‘limbs’,” a frequent allusion to prunes and to pinochle, and an employment of such terms as “scrumptious” and “bong-tong.”

But Nathan goes on to praise The Madonna of the Future, saying that

its theme is viewed through the glasses of a man possessed of a certain pleasant measure of cultural background and expounded in well thought out and effective vein; its net impression is of a piece of writing designed by a civilized gentleman for a civilized audience.

The New York Times ran this list of adjectives that had been used to describe the play, ranging from puerile to shocking to brilliant: 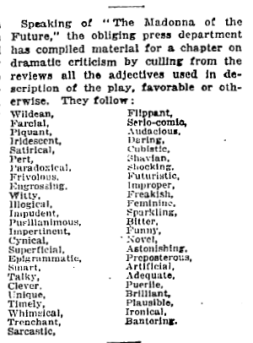 After the theater received the letter, the script was revised, there was some back and forth with McAdoo, the play closed on Broadway after less than two months, and the censored version, retitled The Woman of the Future, moved to New York’s “subway circuit.”

In spite of its short run, The Madonna of the Future caused quite a stir. Today’s Iris Fotheringhams may, in part, have Alan Dale to thank for getting people used to the idea that having a baby without a husband isn’t all that big a deal.

Alan Dale lives on in another way as well: his 1889 novel A Marriage Below Zero has been described as the first English-language novel to depict a romantic relationship between two men.

All in all, not a bad legacy for someone who said “scrumptious” and “bong-tong.”

*This William McAdoo, a former congressman and New York police commissioner, was born in Ireland and was apparently no relation to Secretary of the Treasury/Railroad Administrator/Woodrow Wilson son-in-law William Gibbs McAdoo.