Erté, the artist and designer whose name is synonymous with Art Deco, was only twenty-five in 1918, but he was already making a name for himself. (A fake name: his real one was Romain de Tirtoff. Erté comes from the French pronunciation of his initials.) He got his start designing covers for Harper’s Bazar. I’m not sure what this one means, but an online slideshow of classic covers at the magazine’s website says that it “suggests a dadaist influence.”

I had the impression that everyone drove around in Model T’s in 1918, but the magazines were full of ads for all different kinds of cars. This one, the Marmon 34, set a new coast-to-coast speed record in 1916: 5 days. 18 hours. 30 minutes.

Clothes for the well-dressed boy. The Palm Beach suit costs $7.49–a week’s pay for an office boy at a New York law firm. 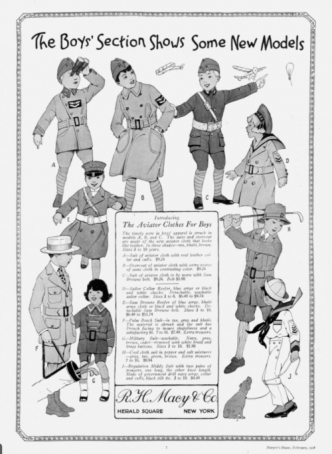