What to serve for breakfast to your two husbands and your children who are drawn in a completely different style.

The whole point of UNDERwear has eluded this family. 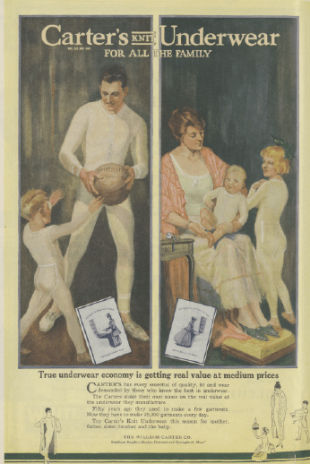 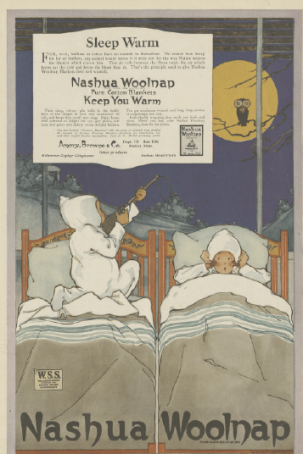 And happy Hanukkah to all who celebrate!*

Not to brag, but I have a machine that can do all this and more.

We’ve all been there, right? 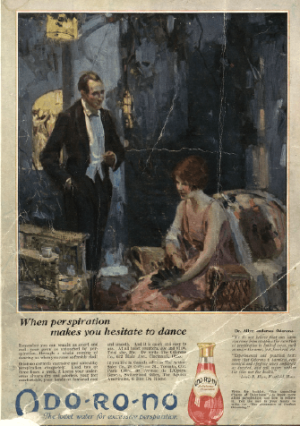 This deviled tongue mousseline is “just as good to taste as it is to look at.” Sometimes these things just write themselves.*

And sometimes I just have to throw up my hands in bewilderment.

I don’t think he’s really thought the naked fence-jumping through.

If I’d seen this before bestowing the prestigious “Best Ad Depicting the Advertised Item as Humongous” award last month, things might have played out differently.

I’m not that into cars, but I look at this, look at my white Toyota Corrolla, and sigh.

*Plus it’s patriotic, because for some strange reason tongue has not been declared “Essential” for our fighting men.

It’s been a long time since I’ve done a Miscellany.* Here’s an all-women’s-magazine edition, full of summer pleasures.

Get your wool bathing dresses here!**

With stockings, of course! 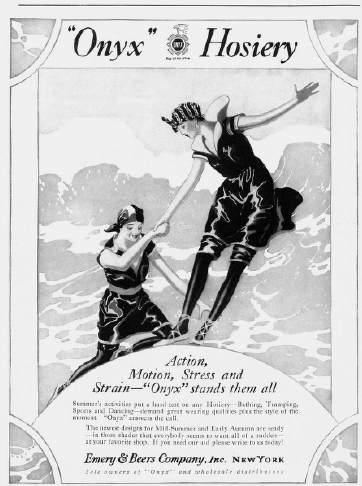 These outfits are adorable and all, but have the designers ever MET a boy?

How many lively out-o’-door appetites can YOU find in this picture?

Why am I not sipping a new-day drink in a crisp white frock? 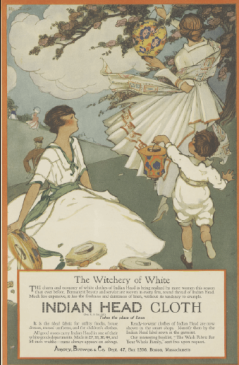 Enjoy the last few weeks of summer, everyone!

*Which, now that my schedule has changed from Tuesday-Thursday-Saturday to whenever I feel like it, is now just Miscellany instead of Thursday Miscellany.

I have a love-hate relationship with this Norman Rockwell cover. 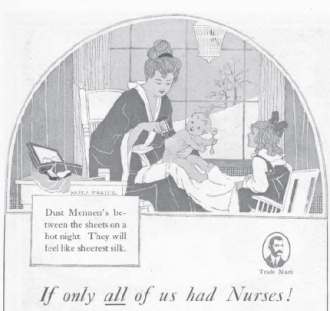 …we would be living in a world of mathematical impossibility!

…and the “our product saved the day in this fake situation” ad.

I love how literally this kid takes the concept of writing a letter to a magazine: “I read the advertisements in you.”

And, finally, some summer color to brighten a wintery Cape Town day. 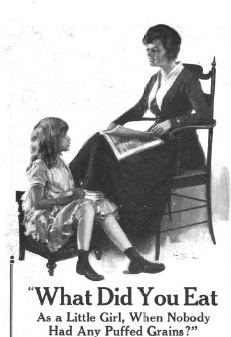 …asked no daughter, ever. 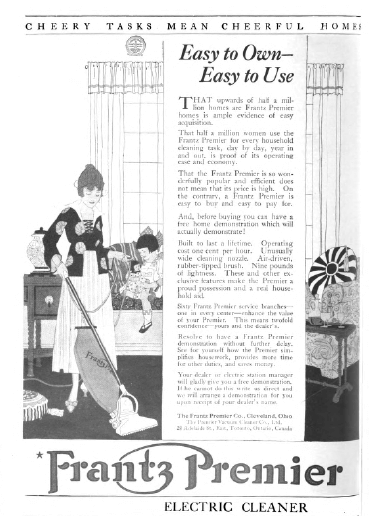 For the aspiring mother.

And for the aspiring non-mother.**

Finally, some modernists and their moms: 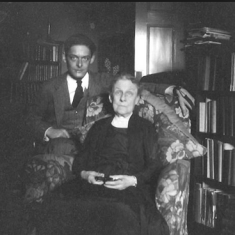 And this is a repeat from my last post but I love this picture.

*To which I hear a chorus of voices of people who actually know me saying, “When was the last time you did vacuuming in any way whatsoever?”

**If she can get a copy–the Postmaster General banned it from the mails.

***CORRECTION 9/4/2019: If you’re wondering what a grandmother is doing in an all-moms edition, here’s the story: I originally identified the woman in this photograph as Williams’ mother after seeing her identified as such in several places, including a blog published by Yale’s Beinecke library, which owns the photograph. When I saw her identified as Emily Dickinson Wellcome in the Williams biography Something Urgent I Have to Say to You, I inquired with Beinecke Library and was told it is Williams’ grandmother. But, as I wrote in the previous post I mentioned, she was a fierce, amazing, mom, so she deserves a place here.

1918 situation: You want to make a movie about dolls coming to life.
Obstacle: Animation is in its infancy and mostly happening in Europe.
Solution: Make a stop-motion movie with custom-made dolls.

The 50-minute movie, called The Dream Doll, was released in December 1917.  You can read more about the film-making process in the January 1918 issue of Everyone’s magazine. Sadly, this movie doesn’t seem to be available online. Most silent movies are “lost,” i.e. there are no copies still in existence,* and this may be the case for The Dream Doll. So it’s not much of a spoiler to tell you that it was all a dream.

(UPDATE 5/4/2018: My recently discovered fellow back-to-1918 blogger, Whatever It Is, I’m Against It, found two short movies by Moss here.  The first one is from much later, but the second one, Mary and Gretel, is also from 1917 and is presumably similar in technique to The Dream Doll. WIIIAI is also on the swapped babies story, see below.)

1918 situation: You want to show video clips of how to do your bit for food conservation by saving fat.
Obstacle: YouTube not invented.
Solution: Food-saving “movies,” i.e. photo sequences.

In the unlikely case that you want to make butter go twice as far by mixing it with milk and gelatin, or save butter by using chocolate instead, or use your inedible fat for soap making, you can learn how here.

1918 situation: Babies maybe switched at birth.
Obstacle: No DNA testing yet.
Solution: Have everyone in the courtroom vote about who looks like who.

The reporters, court clerk, court interpreter, and spectators all thought that the babies had been swapped. The judge agreed, and ordered them swapped back. One of the mothers wanted to keep the baby she’d been raising for the past eight months. Too bad. Case closed!

This post needs some color, so, apropos of nothing, here is the cover of the May 1918 issue of Woman’s Home Companion. 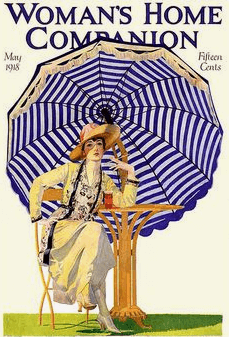 *Reasons: lack of storage space, deterioration, fires, and unawareness that people in the future would care.

This story was a submission to a contest in St. Nicholas magazine. Even if you don’t read it as an allegory of a doomed WWI soldier–and it’s hard not to–it seems way too good to have been written by an eight-year-old. I Googled Edgar Pangborn,  and it turns out that he went on to become a science fiction writer who was one of the founders of the “humanist” school and served as an inspiration to Ursula Le Guin.*

Oh, how sweet! My boyfriend killed someone!

And finally, a harlequin and a ballerina on Rita Senger’s April 1918 Vanity Fair cover.

*He’s going to be hard to top as the youngest person I run across in My Year in 1918 who will go on to later fame.

Imagine my surprise when I opened a copy of Hugh de Sélincourt’s 1918 book Nine Tales, digitized from Harvard’s Widener Library, and found these naked people on a microscope. I was all the more surprised because I went to Harvard* in the 1980s and Widener was so conservative that their cataloging system had a separate “X” category for dirty books, which you had to order from the librarian instead of getting them in the stacks. I had to check out Henry Miller’s Tropic of Cancer for a class one time and I felt like a pervert. 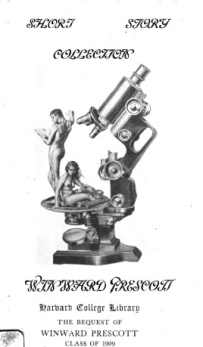 So what’s the story? I searched for the bookplate on Google Images and, proving that you can find anything on the internet, was directed to a website for The McCrone Group, a microscopy company, that includes a page about bookplates with pictures of microscopes, written by John Gustav Delly. I learned that Winward Prescott, Harvard ’09, was a serious bookplate collector; his donation now makes up the largest part of the extensive collection at Harvard’s Houghton Library. If you check out the McCrone Group page–which I highly recommend–the bookplate is image 72. 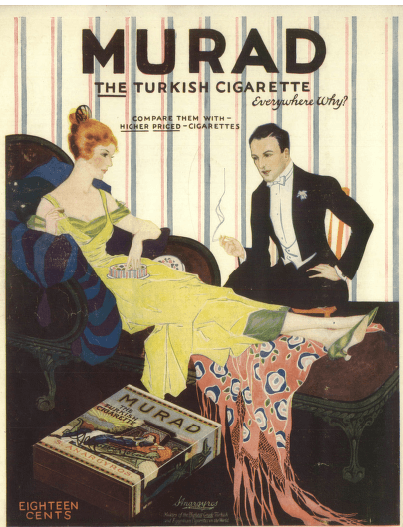 Okay, not courageous at a Russian woman soldier level, but wearing a dress this low-cut to play billiards takes guts.

And, just in time for the D.C. cherry blossoms, a McCall’s cover by Willy Pogany. 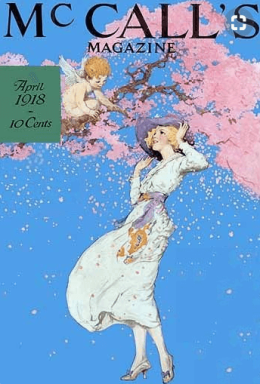 *And, no, people don’t mention this at any possible opportunity. It’s relevant!

He—Well, thank heavens, we shan’t have to go on being decent to those impossible Riggsby people!
She—You mean they’re going to die, or move away?
He—Oh, hadn’t I told you? I found out today that they’re relatives of ours.

The punch line’s only so-so, but I love “You mean they’re going to die, or move away?”

I know, right? The snarling color grotesqueries of wallpaper are the worst.

Um, if your car is so serious that it has its own Latin motto, maybe don’t call it the Locomobile?

And finally, a soldier uses his helmet to water tulips on this Norman Rockwell cover, titled “Easter.” 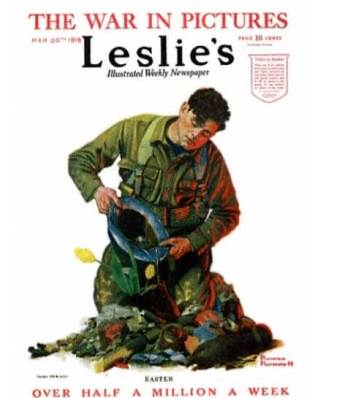 Judge magazine has been running a series called “The Nightmares of a Pacifist,” featuring conscientious objector Willie Bonehead, whose guilty subconscious places him in a series of horrific scenarios. First he is “compelled to dance on every note of the ‘Star Spangled Banner,’ while the girl, who rejected him because he was a slacker, plays the national anthem on the piano.” 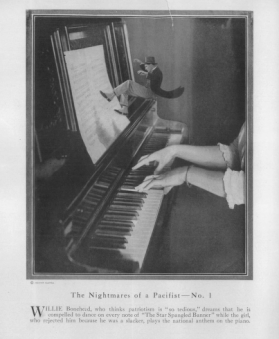 Next he falls asleep while smoking his pipe, which transports him to the front line.

The political message is pretty heavy-handed, but I like the proto-surrealist art.

The table of contents of the March 1918 issue of The Crisis, the NAACP magazine edited by W.E.B. Du Bois, has a listing for “The Funny Page.” The Crisis isn’t exactly a barrel of laughs, so I wondered what this could be. Here’s the answer: 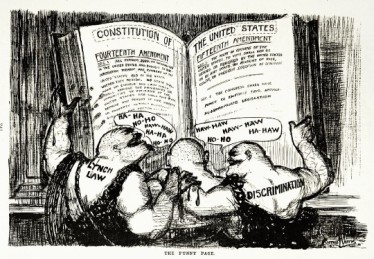 I can’t stop looking at this picture of dancer Irene Castle, which appeared in Cosmopolitan in  March 1918. Just as the issue was hitting the newsstands, her husband and dancing partner Vernon died in an aviation training accident in Texas. He had completed 300 missions as a Royal Air Corps pilot. The Castles were the subject of a 1939 Astaire-Rogers biopic.

*Yes, yes, I know, the United States was not actually at war with the Ottoman Empire.

My Tweets
My Life 100 Years Ago
Blog at WordPress.com.
Loading Comments...