I should have anticipated that this would happen eventually, leaving me with a blog title and tag line that make me look like I can’t do simple arithmetic. (UPDATE 9/8/2020: At the time I wrote this, this blog was called My Year in 1918 and the tag line was “A journey to the world of 100 years ago.”) When I started this project last January, though, the end of the year seemed so far off that it wasn’t worth thinking about. To the extent that I envisioned 2019 rolling around, I imagined myself luxuriating in all the reading I’d missed out on—diving into the new books that have been waiting on my bookshelf

and reading frivolous lifestyle articles, which 1918 was woefully short of. Maybe taking a quiz to find out what Hogwarts house I belong in or what Jane Austen character I resemble.*

What actually happened: I got stuck, like someone in a science fiction story who invents a time machine that breaks down as the dinosaurs are descending. I couldn’t bring myself to read any of those new books, not even the biography of food safety pioneer Harvey Wiley, one of my favorite 1918 people. (That’s it at the top of the pile.) I did look at the New York Times headlines on my iPad on New Year’s Day, but they freaked me out. “What is all this news?” I asked myself. “And what does it have to do with me?” So I retreated to the January 1, 1919 news and My Antonia.

It looks like it will take a while. Maybe I’ll read The Waste Land and work my way gradually back to the present.

In the meantime, from my cozy perch in 1918, here are the December bests and worsts.

The winners of the “Are You a Stagnuck?” quiz: fellow blogger Deborah Kalb of Books Q&A with Deborah Kalb** and Barbara Dinerman. For their prizes, Deborah has chosen a copy of The Melting of Molly and Barbara has chosen My Antonia. Congratulations to both of these loyal readers! You are not Stagnucks at all. The answers will be posted below the quiz soon. (UPDATE 1/11/2019: You can find them here.)

Up to now, four magazines have won the Best Magazine award: The Crisis (three times), The Little Review (twice), The Dial, and The American Journal of Insanity. But the magazine that I turned to most eagerly every month, the one that became my 1918 comfort read, never won the honor. In fact, I came close to naming it Worst Magazine one month, after an ownership change that seemed likely to send it down the tubes.

It began unpromisingly, with a profile of the editor of The Saturday Evening Post and a 15-page article called “The Amazing Story of the Government Printing Office.”*** But then things started looking up, with a Sara Teasdale poem and an interesting article by British war poet Robert Nichols called “To the Young Writers of America,” in which he discusses British taste in American books and vice versa, and notes that up-and-coming poets Robert Frost and T.S. Eliot**** were published in England before they were published in the United States. The highlight for me was when he said that

a certain American poet, come to live among us, antagonized the majority of those who were longing to hear what the real American poets were doing. I will not advertise his name. He does not need my help. He is an adept.

Well, I’ll advertise it: it must be Ezra Pound. I love feeling like a 1918 insider.

Then there was Margaret Ashmun’s Christmas round-up, including several gorgeously illustrated children’s books I mentioned in the 1918 Holiday Shopping Guide, 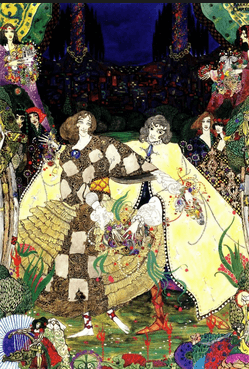 and a fascinating set of articles on children’s literature around the world by writers from England, France, Holland, Spain, and Scandinavia. I was so riveted by the history of children’s books in the Netherlands that I looked up the writer, Hendrik Willem van Loon, who turns out to be the author of The Story of Mankind, which won the first-ever Newbery Award in 1921.

In an article about children’s holiday books, Annie Carroll Moore test-drives them on an actual child, nine-year-old Edouard–an ingenious gimmick in an era when gimmicks were sorely lacking.

“Twin Travellers in South America” looked promising but failed to hold his interest for more than a hasty glance at the pictures. “I think my teacher would like that book because it seems like a geography trying to be a story.”*****

And there’s a review of Booth Tarkington’s The Magnificent Ambersons by H.W. Boynton, who feels exactly as I do about it:

I take pleasure in the book, I suspect, because it covers vividly the range of my own generation and yields the atmosphere of and color of that “middle distance” which, as one emerges from it, is wont to be as blurred and insignificant to the backward eye. And I close the book with the queer feeling that everything about it is true except the central figure.

He reviews My Antonia too, but I’m saving that until I finish the book.

Okay, enough Bookman love–on to rest of the best (and worst).

One of the highlights of my 1918 reading has been Randolph Bourne’s criticism in The Dial. He was modern without (like Ezra Pound) descending into incoherence, hard-headed without (like H.L. Mencken) crossing the line to nastiness. At 32, he had a bright future ahead of him. Or he would have, if he hadn’t fallen victim, after suffering from chronic health problems and disabilities throughout his life, to the influenza epidemic. He died on December 22, 1918.  His last essay for The Dial, published on December 28, was a rapturous review of Lytton Strachey’s Eminent Victorians. It ends as follows:

The book runs over with good things. One closes it with a new sense of the delicious violence of sheer thought. If there were more Gideons like this, at the sound of such trumpets all the walls of the Victorian Jerichos would certainly fall.

I wish he had lived to leave us his thoughts on the explosion of literary talent that would emerge after the war.

On a more cheerful note…

Because what says “Christmas” better than not executing someone for exercising their First Amendment rights?

Because what says “Red Cross” better than a basket of tobacco? 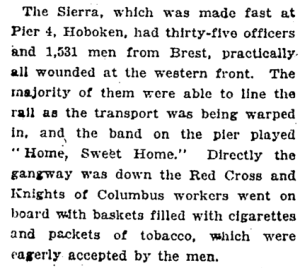 Most 1918 judicial decisions were pretty appalling, but I can get behind Johnson v. Johnson.

Worst praise for a leader during a political campaign:

World War I, as you undoubtedly know, ended on November 11, 1918. Some monthly magazines were on it, like The Crisis

Others missed the boat. The Atlantic Monthly was full of war articles with titles like “Morale” and “Impressions of the Fifth Year.”  St. Nicholas published its monthly update on how the war was going, with one line at the top saying, oh, wait, we won. 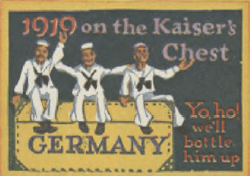 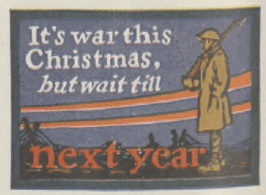 Best caption on an illustration:

Phillisy sidled up to her Aunt Marion, intent on a Red Cross sweater. “So,” she asked, “can people come alive when they’re dead?” 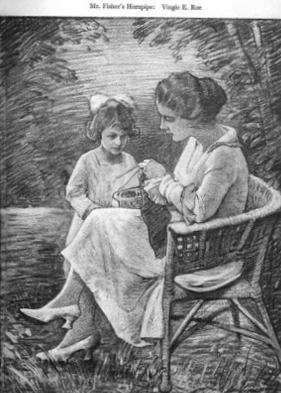 I love both of these Christmas-Eve-in-the-village scenes by Johnny Gruelle of Judge (the creator of Raggedy Ann and Andy) and Harrison Cady at rival humor magazine Life. 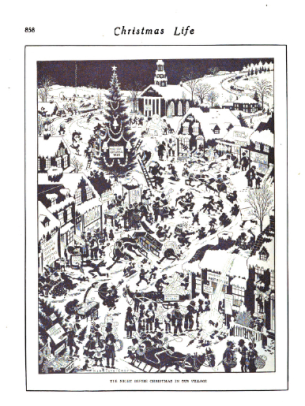 Curious about who drew this charming Life cartoon, I blew it up to to 800% of its size and managed to read the signature: Rea Irvin, who later became a New Yorker cartoonist and created the magazine’s mascot, Eustace Tilley.

With the Huns out of the picture, the cartoonists need a new scary-looking villain. Sounds like a job for…the Bolsheviki! 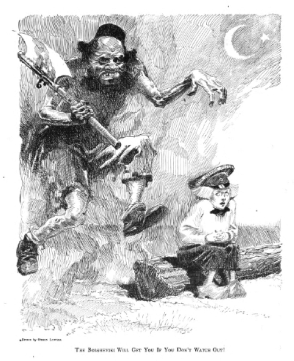 but is edged out this month by rival Turkish cigarette Helmar. 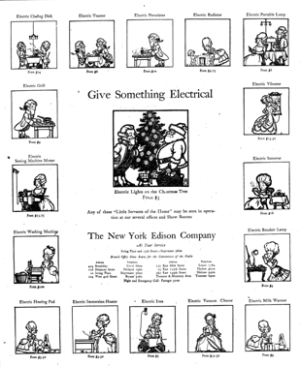 but this was the month of

so it was no contest.

There was surprisingly little Yuletide festiveness on the December magazine covers, perhaps due to bet-hedging on the war.

Erté finally turned up again after several months of covers that are lost to history, or at least to the internet.******* 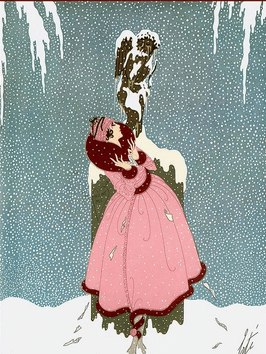 Artist William Edouard Scott was back with another luminous painting on the cover of The Crisis. 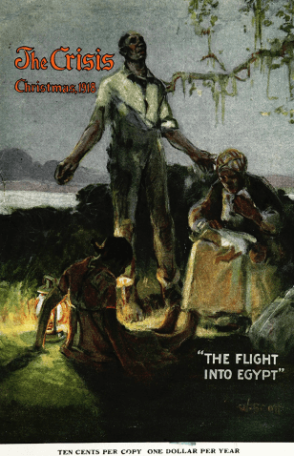 And I loved this Vanity Fair cover,

which might have won, but then I remembered this Dada 3 cover, which was featured in the post on my sad 1918 love life. With the war over, it’s a new era, with a new, sometimes anarchic, aesthetic emerging. And nothing looks more like that future than 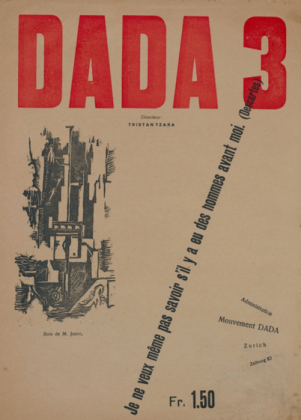 *Although I don’t need to; I know I’m a Ravenclaw and, like everyone else, Lizzie.

**You should check out her website, which features interviews with a huge number of authors (although none from 1918).

***Which, it turns out, is so amazing that the story continues in the January 1919 issue.

****What The Bookman had to say about Eliot under the previous ownership: “There is such a display of cynical cleverness in the verse of T.S. Eliot that I think he might be able to write almost anything except poetry.”

*****Edouard was right. A sample of the twins’ childish prattle: “‘Why, that must be a mataco,’ he said. ‘It’s a kind of armadillo. See, it has rolled itself into a ball for safety. Matacos always do that when they think danger is near. With its head hidden and its jointed shell curled around, it now feels quite safe.'”

*******I couldn’t find an undamaged copy of the actual cover–this is a reproduction of the illustration.

December 31: Renascence and Other Poems by Edna St. Vincent Millay (1917).