When I picked up my mail after arriving in D.C. from Cape Town a couple of weeks ago, I found to my surprise that I have been a New Yorker subscriber since September. My first reaction: “Oh, look, a giant pile of guilt!” Then I saw the brightly colored covers, and I wanted to gather them all in a slippery embrace, like fellow survivors from a lost world. Few things from 100 years ago bring me as much joy as magazine covers, and few things (well, few non-news-related things) are as dispiriting as a 2020 magazine rack.

I had a post on February 1920 covers almost ready before I left Cape Town, but what with all the electricity cuts I didn’t manage to post it. So I’m covering both February and March here.

And also engaging in unwholesome outdoor activities like this:

The artist for this surprisingly risqué cover is Warren Davis. He also drew this February 1918 Vanity Fair cover,

which I took note of back in February 2018. That one was also daring, but it struck me as having that Greek mythology vibe that lets you get away with anything. It turns out, though, that young women cavorting around outdoors naked, or at most with a diaphanous scarf, comprise pretty much Warren Davis’ entire oeuvre.*

Some favorite artists are back: Frank Walts at The Crisis,

and, as always, Erté at Harper’s Bazar.

and at Smart Set, which I’m pleased to see breaking out of its face-of-young-attractive-woman rut.

There are people in traditional dress at Sunset

I loved these covers from House & Garden 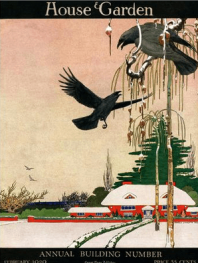 As I prepared for my trip, I was all psyched up to leave the southern hemisphere summer for some outdoor winter fun. Of course, what I actually ended up doing was lugging groceries home in the rain. So good riddance to February…

…and onward to blustery March! 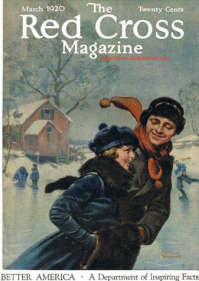 and some early-season boating at Motor Boating. 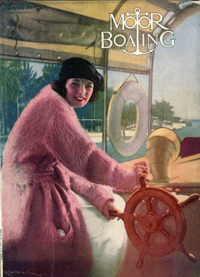 Am I reading this wrong or is this elephant being used as an accessory to kill other elephants?*** And don’t get me started on the African man in the loincloth.

Everybody’s is late to the Valentine’s Day party. 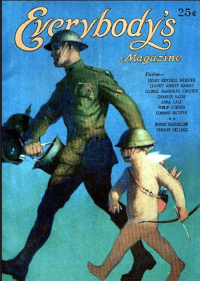 Vogue has a cover by regular George Wolfe Plank 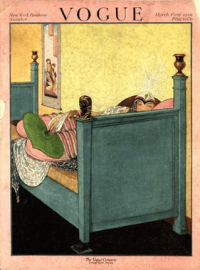 and one by 26-year-old newcomer Harriet Meserole, who would go on to be a Vogue stalwart.****

and The Green Book

and Vanity Fair, which features a cover by Anne Harriet Fish, an artist whom I wasn’t familiar with but who will now join Gordon Conway and John Held Jr. in the ranks of VF artists whose work I can’t tell apart.

Future New Yorker cartoonist Rea Irvin was the artist for this striking, though problematic to modern sensibilities, Life cover.

This woman on the cover of the Saturday Evening Post seems to be about to ditzily cast her first vote for the supposedly more handsome candidate, which I would take offense at, except, um, Warren Harding.***** 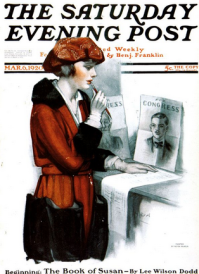 The woodcut on the cover of Liberator is by J.J. Lankes, who was a friend of, and illustrator for, Robert Frost and Sherwood Anderson. 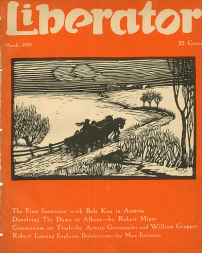 This Photoplay cover isn’t particularly notable except that “If Christ Went to the Movies” is the best cover headline ever.****** 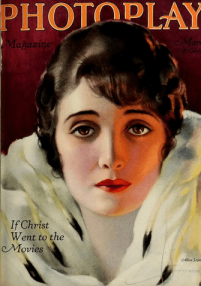 And it wouldn’t be March without a lion and a lamb, courtesy of Carton Moore-Park:*******

Counting the days until spring!

*Google him if you don’t want to take my word for it. Just don’t do it at the office.

**According to the go-to site for Norman Rockwell cover information, this was Rockwell’s fourth and last cover for Red Cross, which folded in late 1920. Rockwell turned to smaller magazines when large-circulation magazines passed on his illustrations.

***I always thought you couldn’t ride African, as opposed to Asian, elephants. Apparently you can, although, according to animal rights advocates, you shouldn’t.

****As far as I can tell, this is Meserole’s first Vogue cover other than this February 1919 one, which is mostly white space:

*****Also, the cover artist, Neysa McMein, was a woman and an ardent supporter of gender equality. Here she is marching in a suffragist parade in 1917. 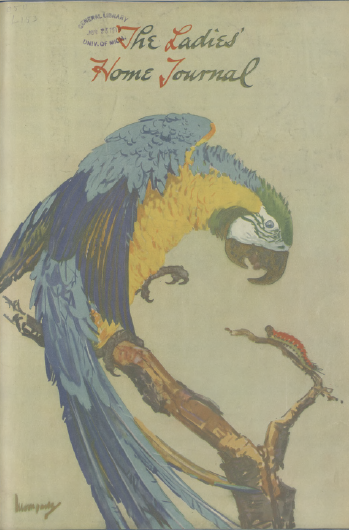 I’ve been in summer school at the University of Cape Town for the last three weeks, studying, among other things, Portuguese.* Between that, obsessing over the recently released archive of T.S. Eliot’s letters to his longtime love Emily Hale, and a pair of maritime mishaps that have been wreaking havoc on South Africa’s internet, I haven’t been able to get much blogging done. But it doesn’t seem right to let the first month of a new decade pass unrecognized, so I figured I’d look into how magazine covers ushered in the 1920s.**

The Saturday Evening Post rang in the new year with this J.C. Leyendecker cover. (The camel is a symbol of Prohibition.)

Sotheby’s website features this painting by Leyendecker, which may have been his original concept for the cover.

I can see why the Saturday Evening Post wouldn’t go for it, but this version makes more sense because without the bottle of whiskey what is the baby shushing us about?

That’s about it for New Year’s-themed covers.

Erté, as always, is at the helm at Harper’s Bazar, with this cover,

which, unusually, has some text on the illustration: “Begin Arnold Bennett’s New Essays on Women in this Issue.” I skimmed the essay, which was in equal parts irritating, boring, and off-topic.***

Vogue starts out the decade with a Georges Lepape cover featuring a person of color, but not in a good way:

This Vanity Fair cover is too good not to repeat. I’m not sure who the artist is, but I’m guessing John Held Jr. or possibly Gordon Conway. (Update 2/4/2019: It’s John Held Jr. I found the signature on a scanned copy of the magazine on Hathitrust.)

and a picture of movie star Norma Talmadge by Rolf Armstrong on Photoplay.****

The Crisis features a photograph of a woman from St. Lucia,

and Liberator has, um, something Bolshiviki by Lydia Gibson.

In sunny South Africa, I sighed over the snowy scenes on the covers of Literary Digest (by Norman Rockwell)

If I could pick one snow scene to transport myself into, Mary Poppins-style, it would be this one, from St. Nicholas.

And, finally, two new****** publications that are well worth looking at: Shadowland, a beautifully designed movie magazine that features A.M. Hopfmuller as its regular cover artist,

and The Brownies’ Book, the first-ever magazine for African-American children, edited by, who else, W.E.B. Du Bois.

I’ll be following both of these exciting ventures in the months to come.

In the meantime, happy January, everyone. Or, as we say in Portuguese, feliz janeiro!

*The other things: Dante’s Purgatorio, special relativity, Rembrandt, Plato and Euclid, Vermeer, Virginia and Leonard Woolf’s Hogarth Press, religious poetry, South African history and politics, and the Enlightenment. I tend to shop for summer school tickets like a hungry person at the supermarket.

**It turns out that when you put 1920 in Google it thinks you’re talking about the whole decade, so I keep having to sift through irrelevant pictures of flappers. It’s going to be an annoying year.

***But don’t worry, Virginia Woolf will, with her brilliant 1924 essay “Mr. Bennett and Mrs. Brown” (published by the aforementioned Hogarth Press), make Arnold Bennet regret that he’d ever SEEN a woman.

****Armstrong also turns out to have illustrated the August 1918 Metropolitan magazine cover that won the surprisingly competitive Best Magazine Cover of a Woman Swimming with a Red Scarf on Her Head award.

*****This woman is, by La Vie Parisienne standards, displaying an unusual ability to keep all her clothes on.

******Or, in the case of Shadowland, almost new—its first issue appeared in September 1919.